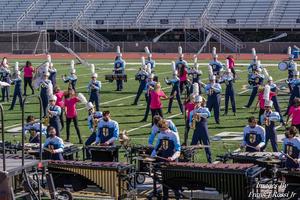 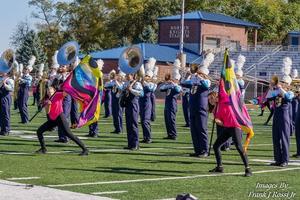 Despite challenges, it was a rewarding and memorable year for the marching band.

Even though COVID-19 kept the band from completing its regular competitive schedule, the band participated in several live events during the season.

USBands, hosted a series of virtual competitions in which ensembles from across the country submitted video recordings and were evaluated by a panel of judges. On September 16th, the band participated in the FLOMarching Kick-Off, where it finished in 2nd behind American Fork HS, Utah.  The band also competed in the Zildjian Vic-Firth Challenge on October 7th, finishing in 2nd place behind Green Canyon High School, Utah.

The band closed its season by participating in the Music For All Live Showcase on Saturday October 17th.  This event was broadcast live by Music For All from Norwin Knights Stadium, and other stadiums across the country, which gave marching ensembles an opportunity to perform for their peers as well as a national audience.

Despite its challenges, it was a rewarding and memorable year for the marching band.