Like that great old movie, that’s where our School Meals program appears to be headed next year: back to pre-pandemic days. Looks like we’ll again be asking families that may qualify for free and reduced-price meals to please apply at SCHOOL CafÉ  after July 1, 2022.

Attention parents!
To learn more about school meals through the School Nutritition Association (SNA),                      visit their About School Meals page. You can find answers to FAQs, hot topics and more. 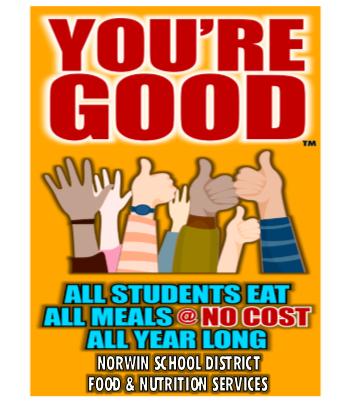 HELP NEEDED
Looking for occasional work that has the same hours as your children and requires no evenings or week-ends?

If you are interested in employment as a school cafeteria worker, apply online at:

chicken
to comply with USDA guidelines for sodium content
Mission Statement:
As a partner in the education process, it is our commitment to provide safe, quality meals that reflect a high nutritional standard, while providing excellent customer service in a warm, friendly environment.

Non-Discrimination Statement:
In accordance with Federal civil rights law and U.S. Department of Agriculture (USDA) civil rights regulations and policies, the USDA, its Agencies, offices, and employees, and institutions participating in or administering USDA programs are prohibited from discriminating based on race, color, national origin, sex, disability, age, or reprisal or retaliation for prior civil rights activity in any program or activity conducted or funded by USDA.
Persons with disabilities who require alternative means of communication for program information (e.g. Braille, large print, audiotape, American Sign Language, etc.), should contact the Agency (State or local) where they applied for benefits. Individuals who are deaf, hard of hearing or have speech disabilities may contact USDA through the Federal Relay Service at (800) 877-8339. Additionally, program information may be made available in languages other than English.
To file a program complaint of discrimination, complete the USDA Program Discrimination Complaint Form, (AD-3027) found online at: http://www.ascr.usda.gov/complaint_filing_cust.html and at any USDA office, or write a letter addressed to USDA and provide in the letter all of the information requested in the form. To request a copy of the complaint form, call (866) 632-9992.  Submit your completed form or letter to USDA by:  (1) mail: U.S. Department of Agriculture,
Office of the Assistant Secretary for Civil Rights, 1400 Independence Avenue, SW, Washington, D.C. 20250-9410;
(2) fax: (202) 690-7442; or (3) e-mail: intake@usda.gov.
This institution is an equal opportunity provider.

Healthier Menus
Norwin School District’s Food & Nutrition Services strives to provide healthy menus and provide the students a wide variety of items, while helping them make wise, health conscious decisions for a number of reasons:
We encourage children to take advantage of the fresh fruits and vegetables on the regular menu, and consider the ala carte items to be an occasional treat. We feature several healthy entrees, a wide variety of fresh fruits and vegetables, and whole grain bread products daily on the regular menu. Through education and curriculum, the students will adjust to the healthier lifestyle and learn to make wise food choices now and in the future.
If you would like to learn more about the school lunch and breakfast programs or have questions about the program please
feel free to call Food & Nutrition Services at 724-861-3038.
FYI:
You can monitor your child's account activity through "Family Access".  If a you need a printed copy of your child's meal statement for any time frame, including the entire school year, please request one from your child's cafeteria manager prior to the last day
of school.  All records from the current school year are deleted from the system to make room for the upcoming school year records.

School food service is the world's largest food service business, serving more meals a day than the fast food industry. School lunch has often been referred to as the original fast food operation: serving millions of lunches across the United States in a time span of 1 1/2 hours.

The National School Lunch Act of 1946 established the National School Lunch Program to safeguard the health and well being of our nation's children. Studies found that the overall health of Americans was poor and many were malnourished. Minimum nutritional requirements were defined. Prior to 1946, school lunches were done primarily by volunteer groups serving mostly cold lunches.

dFor breakfast, vegetables may be substituted for fruits, but the first two cups per week of any such substitution must be from the dark green, red/orange, beans and peas (legumes) or “Other vegetables” subgroups as defined in §210.10(c)(2)(iii).

fLarger amounts of these vegetables may be served.

hAny vegetable subgroup may be offered to meet the total weekly vegetable requirement.

lFluid milk must be low-fat (1 percent milk fat or less, unflavored) or fat-free (unflavored or flavored).

mThe average daily amount of calories for a 5-day school week must be within the range (at least the minimum and no more than the maximum values).

nDiscretionary sources of calories (solid fats and added sugars) may be added to the meal pattern if within the specifications for calories, saturated fat, trans fat, and sodium.  Foods of minimal nutritional value and fluid milk with fat content greater than 1 percent milk fat are not allowed.