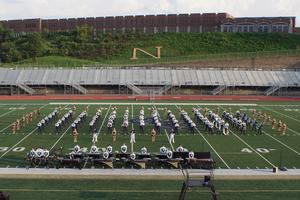 The entire Norwin marching band will represent the community by performing in the Bands of America Grand National Championships in Indianapolis on November 11-13. The band is making its first appearance at the event in a decade. Students will march at Lucas Oil Stadium, home of the NFL’s Indianapolis Colts and the annual Big Ten football conference championship game.

The Norwin marching band has long been a point of pride in the community, winning the Pennsylvania Interscholastic Marching Band Association Class AAAA competitions in 2013, 2014, 2016 and 2017. In 2015, the band won the USBands Group VI Open Class National Championship.

The band will also perform its show, “Harvest,” during a community send-off event on Wednesday, November 10 at 6 p.m. at Norwin Knights Stadium in North Huntingdon.

“The BOA Grand National Championships is the biggest stage for high school marching bands,” said Tim Daniels, Norwin Band Director. “Our entire organization is excited to perform and represent the Norwin community at this prestigious event. The students have worked incredibly hard through challenging circumstances and are very excited to share their program with the nation.”

Additionally, five Norwin students have been selected to perform with the Bands of America Honor Band in the 2022 Tournament of Roses Parade in Pasadena, California. They were selected from hundreds of applicants nationwide to participate in the prestigious event.

The BOA Honor Band is a 300-piece national ensemble with winds, percussion and a flag and dance team. Students will spend the week in southern California, where they will take part in rehearsals, perform at the Tournament of Roses Bandfest and Disneyland and participate in special activities. The parade begins at 11 a.m. ET on New Year’s Day.

In other news from the Norwin band program, longtime volunteer Tom Shrump has received the 2021 Music for All Patrick John Hughes Parent/Booster Award. The honor annually recognizes the extraordinary commitment, dedication, support and sacrifice of music parents and boosters around the world.

As a Norwin student, Shrump was a member of the band that won the 1982 BOA Grand National Championship. He later went to serve as instructional staff, logistics and transportation director, chairman of the Norwin Band Festival and Winterguard Show and Norwin Band Aides president.

Shrump passed away in April. His wife, Heather, and daughters Rylee and Kassady will accept the award on his behalf at the BOA Grand National Championship awards ceremony in Indianapolis.

“Tom Shrump was an incredible member of our community and had a tremendously positive impact on our band students over the years. He continues to be dearly missed here in Norwin,” said Dr. Jeffrey Taylor, Superintendent of the Norwin School District. “We are pleased that he has been honored in this way at a national level. His memory certainly lives on in the success and dedication of our band students, who continue to accomplish amazing things and make us all very proud.”